We all deserve badges for resilience and adaptability

Previous Next
We all deserve badges for resilience and adaptability

for a competency-based education?

Badges as a Motivation to Advance

Most of us have grown up with some form of badging to recognize accomplishments. Some remember merit badges awarded during Boy or Girl Scouts. Some work in organizations that award pins for years of service. Of course, gamers are very familiar with endless ways to earn badges and level up. The age-old strategy persists because it works; it draws on our natural desire to improve, to achieve, to win, and to get recognition when we do.

Please indulge me while I reflect on personal experience. I’m a former high school Spanish teacher. My wife is multilingual. We see language as a tremendous asset, and thus are committed to promoting languages among our children. When our eldest son, Eli, was three years old, we enthusiastically enrolled him in a dual immersion preschool, where 100% of instruction was in Spanish. To our surprise, rather than becoming fluent, he emerged after three years with very limited capability. Years later, now at a charter Montessori school, Eli has one hour of Spanish per week – not nearly enough for him to become proficient. I had submitted to the reality that perhaps he would not emerge from his schooling speaking Spanish.

Then came the Coronavirus pandemic and the transition to homeschooling. The school introduced Eli, now 12-years-old, to Duolingo, an online app for learning languages. All of a sudden, he became highly interested, doing Spanish for an hour or more a day! He now is learning Spanish at a remarkable rate. I’m fascinated by the change and wonder about the cause. Like many other online learning apps (e.g., Khan Academy), Duolingo is gamified, with students earning badges and leveling up. It celebrates progress and accomplishment, motivating users to continue to advance to higher and higher levels of achievement. To my delight, after just a few weeks, Eli is speaking Spanish around the house using full sentences!

As a school reformer, I’ve always liked the idea of awarding digital badges to students who demonstrate various competencies, whether collaboration, initiative, empathy, creativity, or civic action. I wonder why programs like 21st Century Skills Badging, designed jointly by the Foundation for California Community Colleges and New World of Work, have not become more popular. Is it because the incentives are not in place? Is it that our education system does not adequately value student demonstration of 21st century skills and social emotional learning outcomes? Is it because those competencies have not yet earned a place in our state accountability system? Inherently, we know they are important, and a growing body of research reinforces the benefits to student achievement and success. 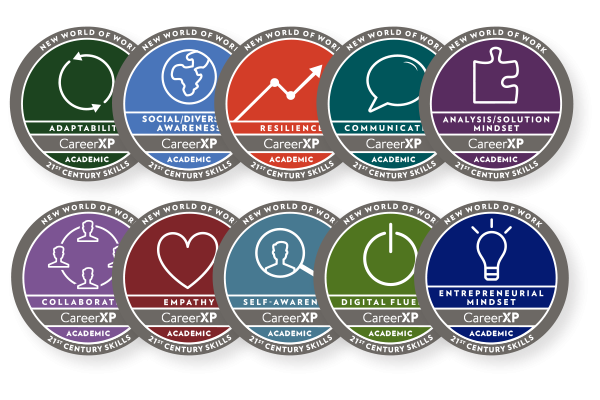 Badges could help us focus on what matters

In a recent blog post, I emphasized that the current circumstances accentuate the need and urgency to embrace 21st century skills and social emotional development as core and central to our education process. As we reflect on what we’re learning – individually, organizationally, and societally – during this disruption, we must consider how the “new normal” will value the competencies that young people have demonstrated so impressively over the past two months – adaptability, resilience, empathy, compassion, civic responsibility, effective communication across platforms, digital literacy, independence, initiative, resourcefulness, creativity, critical thinking, and more.

Could digital badges help us signal the importance of those competencies? How can we build the capacity of teachers to both demonstrate and measure these skills? Will we add them to report cards? Could more recognition, perhaps through approaches such as badges or gamification, elevate their importance for students? As per my last blog post, might it be time for the traditional “currency of education” – the high school transcript – to give way to a newer currency that is more equitable, student-centered, and competency-based. Might digital badges be the best currency as we pivot to a competency-based approach to learning and assessing students?

Fortunately, a group of school districts is already tackling these questions. They are pioneering members of a new community of practice dedicated to educating the whole child. A new California partnership, called Scaling Student Success, works with school districts that have engaged their local stakeholders to create a Graduate Profile – a succinct, one-pager that articulates the skills, competencies, and mindsets young people need for future success. These districts are eager to move “from poster to practice” – i.e., breathing life into their Graduate Profiles, giving each and every student an equitable opportunity to develop and demonstrate the competencies articulated on their Graduate Profile.

One common challenge among the districts in the Scaling Student Success community of practice is how to measure and report on the Graduate Profile outcomes. They recognize that not all are achievable during 180 school days, from 8:00 am to 3:00 pm. They wonder how they can actively involve their community members in offering opportunities for students to practice and demonstrate competencies beyond the boundaries of the classroom, clock (school day), and calendar (school year). For example, would it be possible to engage families, neighbors, soccer coaches, dance instructors, scout leaders, internship supervisors, and other youth-serving community members?

I have a dream

While my dream is nowhere near as ambitious nor eloquent as the one expressed by Martin Luther King Jr. in 1963, it’s a dream that I too hope can become reality in the years to come. Let’s create a phone app that allows students, their peers, families and community members to rate student performance on any competence represented on a district’s Graduate Profile.

To understand how this would work, let’s return to my son Eli. Similar to a Graduate Profile, his school has a set of “Whole Child Reflections” that include empathy, independence/responsibility, acceptance of self/others, problem solving, positive risk taking, integrity, organization, contribution, curiosity and initiative, and critical thinking. On report cards each quarter, his teacher rates him on a scale (AC = area of concern, S = sometimes, O = often, C = consistently). But, those ratings are merely teacher observations during class time. They do not include self-reflection, peer assessments, or ratings offered by other adults who interact with Eli both in and out of school.

Last month, Eli shared that he wanted to earn money to buy soccer training equipment to bring to the park each afternoon. He learned during the recent spring break that he can make money washing cars. So, Eli created a flyer promoting “Eli’s Car Wash,” printed it, and placed it on a few dozen door steps in the neighborhood (see Eli’s fun flyer here). Over the past few weeks he’s already earned over $500! Wouldn’t it have been ideal if he had the opportunity to ask the neighbors to rate him on independence/responsibility, initiative, and perhaps problem-solving. The neighbors could download the app, offer a rating, make a comment, and even attach an artifact.

Then, when Eli has received five or more ratings for, say independence/responsibility, he could use the app to submit the ratings for review and approval. His teacher could review the ratings and associated comments and evidence, and determine whether he had met a standard. If met, Eli would be awarded a digital badge representing his demonstration of competence. That badge would become a portable credential that he could then use in multiple ways, i.e., when applying for his first job or applying for college.

Benefits to Students and Schools

An app like this could have many benefits, including:

Please share your ideas. How can we promote community-based learning opportunities and validate students’ demonstration of essential skills? Are there places where this kind of badging system is already working? What have you seen and experienced? What would you like to see?